Trending
You are at:Home»Everything Else»Best Drinking Games You Can Play For Your Upcoming Party

Are you about to host a weekend adult party? If you are on the lookout for the best drinking games that you can play, here are some suggestions and hopefully liven up every guest partying mood. Investing in these drinking games are more practical than resorting to DIY games. 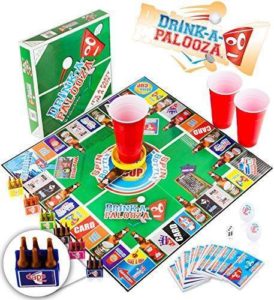 This is one of the best drinking games played at parties of university students including adults. This board game has many classic games to offer inside the box such as the beer pong, quarters, make a rule, flip cup and a lot more. All the games are easy to play. So, what are you waiting for buy now the Drink-A-Palooza board game and impress your guests with a one of a kind party. 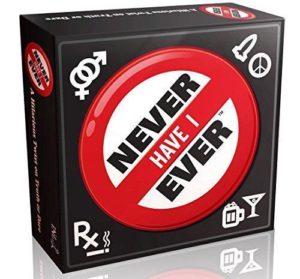 Another popular adult drinking game that is widely played in most parties serving alcoholic beverages is the Never Have I Ever. This board drinking game is a great way to break the ice and spice the party. This board drinking game has 358 questions and 82 truth or dare. The gameplay starts with the rolling of a dice, getting one card and reading the statement on it loudly. The person has to answer it or take the dare challenge like “I’ll take a drink”. The person claimed as the winner is the one that crosses the finish line first. 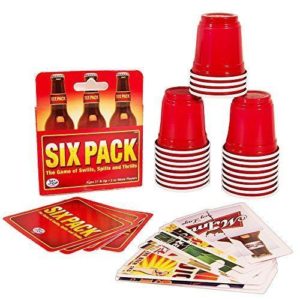 The Six Pack Card is very popular with university students. This drinking game kit has 20 red cup shot glasses. It’s a fast action game that can have two or more players with the initial player collecting his or her favorite brand calls “the shots” for other players. This car drinking game is also ideal for couples trying to have a relaxing night with some alcohol. 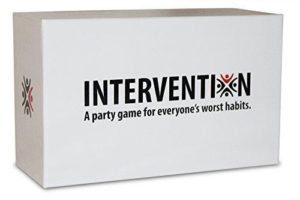 If you want every guest to have fun as the partying and boozing starts why not include the Intervention as part of the break-the-ice activity. Intervention is an adult party game that aims to liven up the party as everyone is up for revelations. This drinking game is a remake of the 90s game “True Colors” and could be the most suitable pre-game that will boost every partygoer’s spirit. 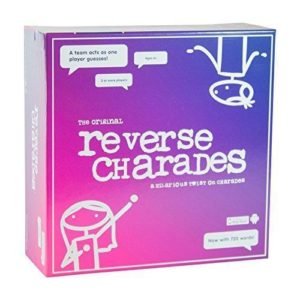 Among the most played adult drinking games is the “Reverse Charades”. This drinking game is quite similar to the traditional charade game. Here, instead of an individual acting the clue for the others to guess, a team performs the clues for one person to make a guess. The entire guessing should only take 60 seconds. This board game can also be played by families and companies holding a team building activity. 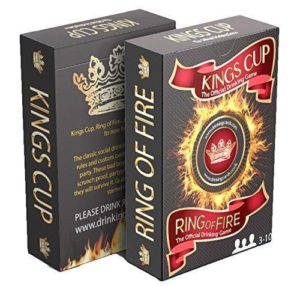 Kings Cup is a drinking game that has been played for generations. Why? Everyone has a chance to participate and discover the wild side of other partygoers. The Kings Cup consists of a deck of cards, ¼ L of beer boot or cup and beer. Players are requested to gather around a cup and take turns picking cards. The first 3 players to get the “King” will pour some of their drink into the cup in the middles. The, whoever picked the last “King” is proclaimed loser and required to drink all the amount of beer in the Kings Cup. 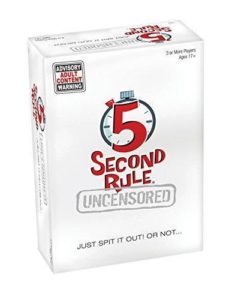 Are you a fan of the Ellen play where there are funny videos shown? The 5 Second Rule Uncensored has the same concept of gameplay like name three things in a span of five seconds. You might assume it’s quite easy, but when everyone is watching and waiting for your answer you might get tongue-tied. 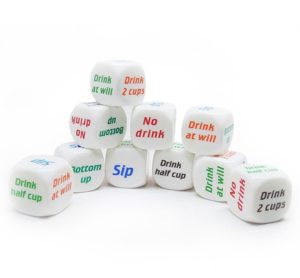 Last on the list of the best drinking games is the “1-Piece Dice Decider Game” where everyone could join. This drinking game makes use of the dice to determine who wins or loses by simply rolling it.

Liven up your adult party with the above drinking games and for sure you will be the talk of everyone the next day. You can mix and match these drinking games for a party worth to remember.

Doree-Lyn Nuguid is a professional freelance writer/blogger from the Philippines. She has wide knowledge of Search Engine Optimization (SEO) content and Social Media Marketing (SEM). Most of her writing projects deal with medical, health, and business industries.